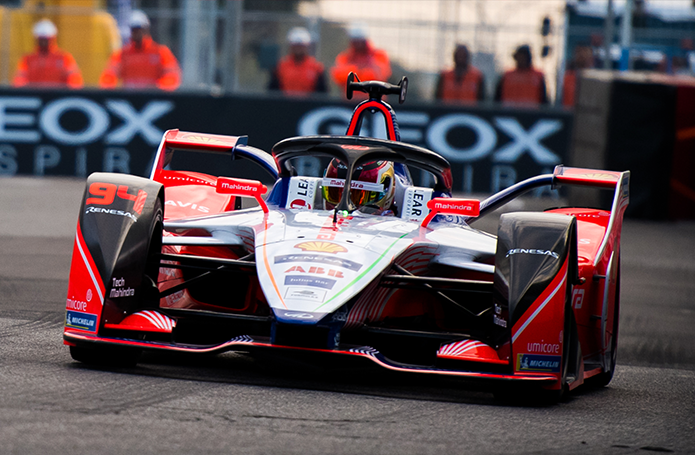 Season 5 of the ABB FIA Formula E Championship has been an exhilarating ride, and some of the great moments were our multiple Super Pole qualifications, which is what we’re looking at in this post. For the uninitiated, Super Pole is the showdown of the six fastest drivers in group qualifying. Held immediately after all the drivers in group qualifying have posted their laps, Super Pole is a one-lap shoot-out for pole position of the race. By achieving pole position, the driver starts first on the grid for the race and gets three bonus points.
The top six starting positions for the race are determined in this high intensity shoot-out. This season, Mahindra Racing’s performances in qualifying have been very strong, making it into Super Pole six times over the course of the season. Let’s have a look back at the six times Mahindra Racing made it to Super Pole.

1. Santiago E-Prix – P2 for Pascal
In only his second race as a Formula E driver, Pascal Wehrlein showed exactly why he was rated so highly. With a cracker of a lap that put him at the top of the timesheets in group qualifying, Pascal then drove a dramatic lap to qualify second in Super Pole, just one tenth away from the eventual pole sitter. Pascal converted his superb qualifying attempt to a successful result in the race, eventually finishing second. A truly remarkable drive to take home his first Formula E podium while managing the challenging high temperatures of the race.

2. Mexico City E-Prix – A Superb Pole
Mahindra Racing secured its first pole position of the season courtesy of a stunning lap by Pascal. With the track temperature between 40 and 45 degrees during qualifying, Pascal was able to manage his tyre temperatures well, getting them into the optimum working range. This helped the German take pole position and three bonus points by a dominating margin of three tenths of a second. In the race, Pascal held the lead until the very end when he ran out of usable energy, leading him to cross the finish line in sixth.
3. Monaco E-Prix – Another front row start for the #94
Track position is a massive advantage on the narrow Monaco streets and that made qualifying all-the-more crucial in the principality. Using his experience of driving at Monaco previously, Pascal finished second in group qualifying by a miniscule margin of 0.010 seconds. That provides a perfect example of the level of competition in Formula E – every microsecond counts. Come Super Pole, Pascal delivered a superb lap under pressure to finish fourth, with the gap to pole position again being very marginal – only one tenth of a second! Penalties for two preceding drivers meant that Pascal started the race from second on the grid. After defending the position well for a large proportion of the race, an unsuccessful attempt to overtake the race leader saw Pascal drop down to P4 for the rest of the race. In the end, that was exactly where he finished but not without putting up an entertaining fight for the final podium position.
4. Swiss E-Prix – Pascal does it again!
In the ABB FIA Formula E Championship, we frequently visit new cities and new racetracks. This time around, the Swiss capital of Bern hosted a race for the first time and our man, Pascal Wehrlein, took no time to adapt to the unfamiliar circuit. He went straight in and finished third in group qualifying, achieving a Super Pole appearance yet again. Pascal drove a very controlled lap and finished at P4. Unfortunately, the advantage of the promising grid position was wiped out almost immediately after the start of the race as Pascal was an innocent bystander of a multi-car pileup familiar to Formula E that took him out of the race.
5. New York City E-Prix: Race 1 – Mr Consistent makes it six
In the penultimate race at New York, Wehrlein battled a hot and dusty track to finish third in group qualifying. Under demanding conditions for the drivers, Wehrlein stormed to P2 in Super Pole, clocking in one of the fastest laps of the day, and earning another front row start. Unfortunately though, Pascal’s starting grid slot was on the dirty side of the track; this means that his side was dustier and less grippy than the other side. That turned out to be the only thorn in our rose – the unfriendly conditions caused Pascal to get a less than ideal start, which demoted him down the grid. Although he tried to initiate a fightback, the damage had been done and, in the end, Pascal finished at P7, two places ahead of teammate Jérôme D’Ambrosio who made one of the best comebacks in Formula E history by finishing 9th after starting 22nd.
Bonus: Fine margins deny a deserved second pole position at the Paris E-Prix

The fourth annual Paris E-Prix was where Mahindra Racing showcased its best qualifying performance of the season. With the air temperature dwindling down as the session progressed, both Pascal and Jérôme nailed down two clean laps to get into Super Pole. This was the first time that both of our drivers made it into Super Pole together this season. Come the final shootout, Jérôme clocked in a tidy lap to qualify sixth while Pascal pulled out an ace from his sleeve, taking pole position by 0.15 seconds and becoming the first repeat pole sitter of the season. Alas, both Pascal and Jérôme’s joint best qualifying performances of the season went in vain; the qualifying laps of both our drivers were deleted due to a minor infringement in tyre pressure limits. In the end, Pascal made a stunning comeback to tenth after starting from the back of the grid and surviving the torrential conditions in the race.